There are many misconceptions about housing prices. It’s important to look at trends and behavior to see what’s really happening.

While the United States was deeply entrenched in the COVID-19 pandemic, local housing markets began heating up. People began flocking to the suburbs and areas with more space. This pent-up demand for housing has persisted post-pandemic, leading to one of the most notable seller’s markets in recent history.

There are beliefs circulating that we’re in a bubble and that such rapid home appreciation is unsustainable. Interest rates are still relatively low, but the Fed is planning to gradually raise rates. Coupled with the fear of inflation, many Americans believe that home prices will decline. This article is intended to shed light on many misconceptions about housing prices and show great cause for continued optimism moving forward.

At a glance, this appears to make sense. The logic for this argument is as follows:

Buying a house is less about property value and more about what people can afford as a monthly payment. As interest rates increase, so do monthly payments. Higher payments deter buyers from purchasing a property. This causes the demand to drop and prices to correct. 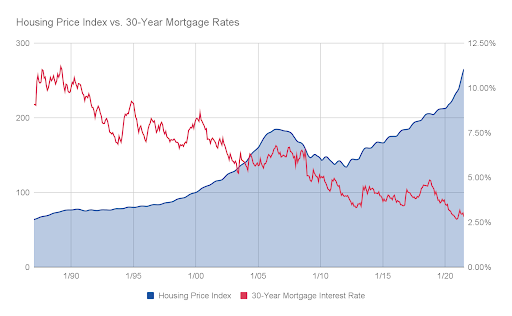 Historically, home prices usually don’t fall when interest rates rise. Over the past five decades, there is only one example of home prices dropping during a rate hike. This appears to be an outlier because interest rates have fluctuated greatly over the same period of time. Despite these ebbs and flows, home prices have steadily increased.

There is an assumption that when people lose their jobs, they can’t afford their homes. This hardship is believed to force homeowners to sell, leading to increased inventory on the market.

These assumptions are false. Although people lose jobs during recessions and economic downturns, this doesn’t immediately translate into significant price drops. People still have to live somewhere. It’s also not likely that they would panic sell because homes take longer to liquidate than other assets. While homeowners may be impacted financially, it does not necessarily translate into a drop in prices. 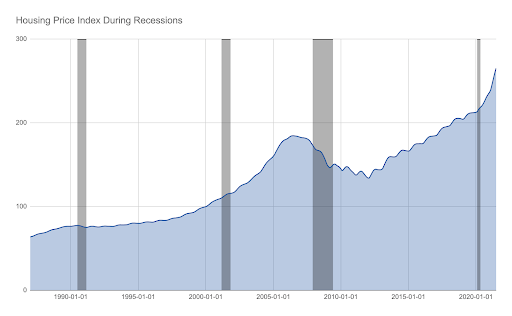 The truth is, home prices fare better during shorter recessions. In fact, they have actually increased during two out of the last four recessions. It’s also important to note that no two recessions are the same.

The last recession serves as a great example of how behaviors change. During the 2007 to 2009 recession, we saw an uptick in multi-generational homes and some grown-up “kids” remaining at home longer. Since this was largely caused by real estate, it has created a recency bias where people associate economic downturn with decreasing home prices.

Keep in mind: the economic forces leading up to a recession play a tremendous role in future outcomes. They will determine how resilient home prices are and/or how much they are going to vary across markets.

3. Increase in supply will cause housing prices to fall

New permit filings are soaring to 2006 levels—or so it seems according to the news. Does this mean the market can be oversupplied similar to 2006?

The short answer is “no.” There are many reasons why this is not the case. We may be approaching 2006 permit levels, but housing starts are nowhere near pre-Great Recession levels. It’s also worth noting that not every permit filed translates into a construction start and not every start will become a completion. 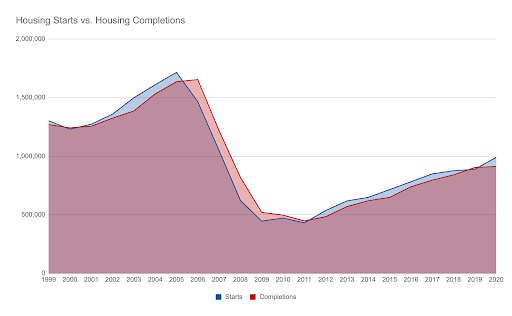 Even if construction starts were to reach 2006 levels, it will take some time to make up for the supply gap between single-family home constructions and household formations. In fact, the gap continued to increase. It went from 3.84 million homes at the beginning of 2019 to 5.24 million homes in June 2021.

There’s also no such thing as national real estate, so we need to examine this at a local level. Some metros have experienced more rapid growth in permits than others. Other variables need to be considered such as whether business formations and job creation kept up with the permit activity or vice versa.

In places that create jobs but don’t increase housing stock, prices are driven up by lack of supply. Places that rapidly increase housing stock as well as create a favorable environment for businesses attract migration. Prices in these places go up because one continues to outpace the other. The number of job postings today is at an all-time high and remote work is changing traditional housing health metrics, at least for now.

Considering the fact that natural disasters have been increasing in frequency, this seems to make sense at the surface level. Those who live in areas with higher natural disaster occurrences should be pricing in the risk of suffering from a natural disaster. It also means needing to pay higher insurance premiums.

Data shows the opposite. In fact, home price appreciation in the highest risk natural disaster areas is 1.7 times the overall market appreciation over the last decade. Residents local to these areas are somewhat used to natural disasters. They are aware of the risks and choose to live there anyway.

We see examples of this across the United States. Despite the ever-present earthquake threat in California, the housing market is booming. Texas, which is famous for its floods and tornadoes, has been the migration darling. Similarly, Florida continues to experience mass migration even with hurricanes and sinkholes abounding. Interestingly enough, the cities that had massive hurricanes experienced higher levels of home value appreciation in the year after the storm than the year prior. 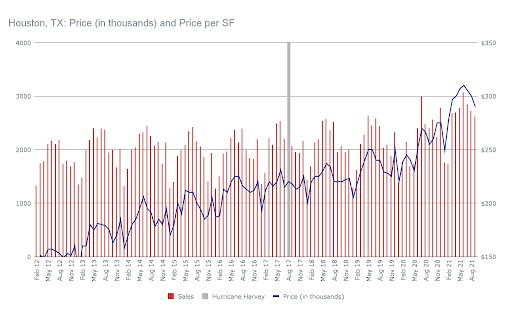 As people repair the flood damage or rebuild post-disaster, the replacement housing is newer and higher-priced per square foot, so that’s one possible explanation behind the price appreciation spike. Another may be the temporary supply constraints as local contractors churn the post-disaster inventory. 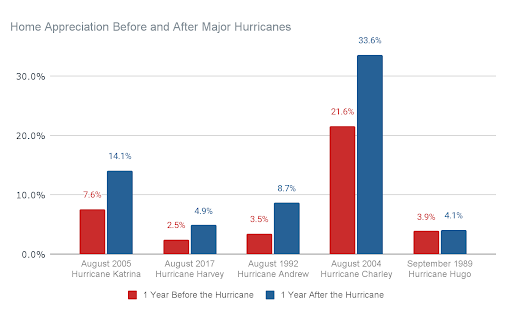 Tight inventory and rising prices continue to pose a serious challenge for homebuyers in 2021. Recent reports and headlines offer glimpses of hope that this will change. They point to the increase in homes for sale and a general cooling trend within the market.

The market will be slightly better if they mean more inventory, a slower pace, and moderating price growth. However, these better conditions come at a cost. Look for potentially higher interest rates and subsequently, higher monthly payments. As we demonstrated by our first point, waiting for prices to drop as interest rates increase is not something buyers can count on.

Housing markets around the United States continue to remain strong. Continued competition and low inventory are keeping properties in high demand. In addition to traditional homebuyers, there are some newcomers to the scene looking for returns in the housing market. REITs and iBuyers scooping up properties view housing as a tangible asset to hedge against inflation. Based on these behaviors and historic data, it’s safe to assume that home prices will remain steady.