In this Sundae home renovation, we take a close look at the strategy and thinking behind each decision that went into reinvigorating this tired Costa Mesa property.

This property in the heart of Costa Mesa, California, didn’t have a defined architecture to begin with, but it had so much going for it: a corner lot, above standard backyard size, and multiple outdoor spaces — all we had to do was get the interior to shine just as bright.

The style of the house lent itself to many directions design-wise, but as soon as we explored the inside, we knew just what it needed: a mid century coastal vibe and open concept feel.

In order to maximize the space of this three-bed, two-bath home, we took a look at the property’s floor plan to see where we could make improvements to the overall layout of the house. Both the living room and backyard had plenty of space, but our team felt we could make some small changes to make this property pop in the neighborhood.

Whenever we tackle the floor plan of a renovation, we always focus on three main areas: the overall flow of the home, the kitchen, and the primary suite. These are often the areas buyers look to first, by optimizing these spaces it is the difference between hitting and vastly exceeding your anticipated after repair value (ARV). Simply put, if the flow of the home is great, the kitchen is spacious and the primary suite checks all the boxes buyers are going to pay a premium.

When looking at the flow of the home, this two-sided fireplace was an obvious hindrance in the connectedness of the two living spaces. We always address major system inspections such as fireplaces at the beginning of every renovation to ensure everything is safe and working properly. In this case, we had an inspector come out to the property and examine the major systems. When we got the report back that said it would cost more to repair the fireplace than to just demo it altogether, we went with the latter. On top of that, the fireplace was not structural, so the decision to remove it and open up the dining room was a no-brainer. By getting rid of the fireplace, we were able to drum up an improved kitchen layout that was much more open and functional.

Opening up the kitchen in this Sundae home renovation 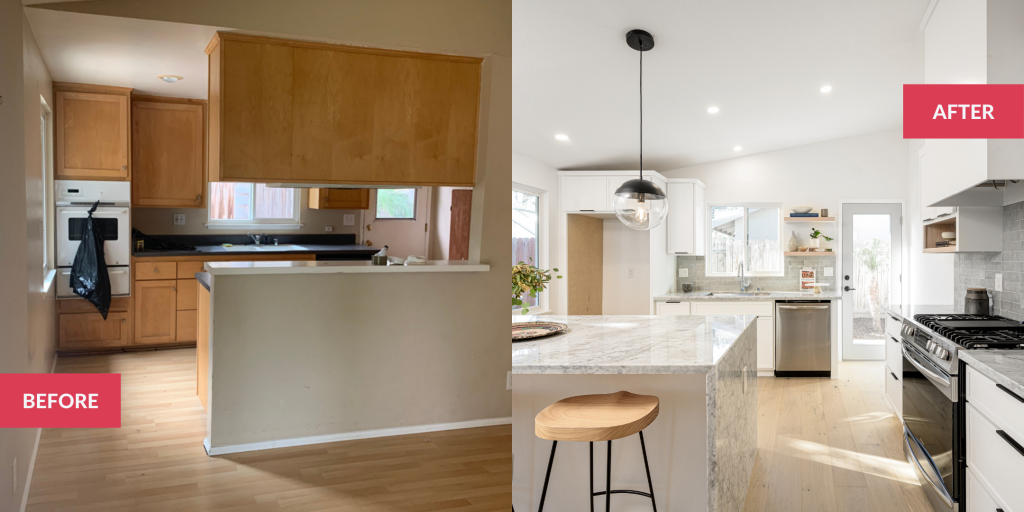 Once we got rid of the fireplace, we really had a lot of space to work with the kitchen layout. Keeping the side door was a priority as well as adding more counter space. As a result, we shifted the range to the same wall the fireplace was on so it could be a standalone feature, moved the fridge near the sink and connected it to existing water hookups, and added a massive obstruction-free peninsula. Not having any major appliances in the peninsula makes it the perfect workspace and with enough overhang for three stools — the ideal hangout!

When it came to finishes, a mid-century modern, but still beachy and organic vibe was our goal. We went with modern white cabinets, but juxtaposed it with handmade grey ceramic tile and waterfall marble countertops to keep it balanced. For finishing touches, black pendants matched with black hardware really tied the whole kitchen together.

Adding a bigger closet and bathroom to the primary suite

The other major floor plan change we made was to the primary suite. As you can see, before the bathroom was very small, and the bedroom didn’t have much closet space. To improve this, we pushed into the existing hall closet as well as into the bedroom in order to get a more functional layout with a large shower and dual sink vanity. This change also made the hall bath a little bigger — a win win overall. 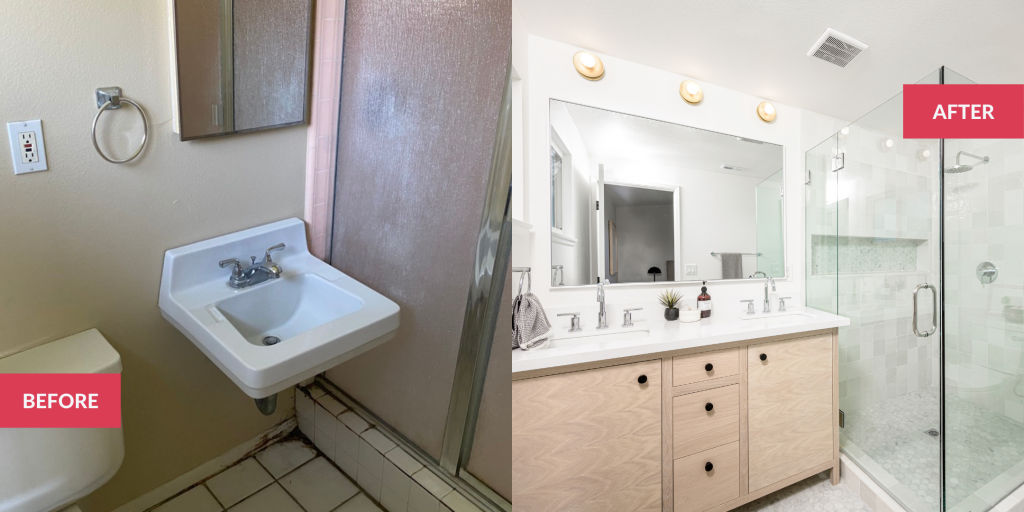 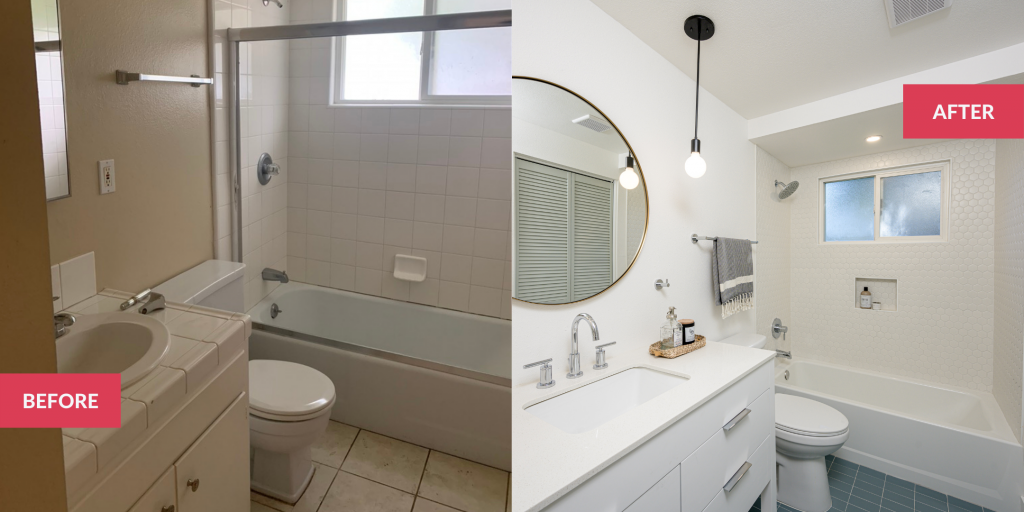 We also stole the closet from the adjacent bedroom in order to give the primary suite as much closet space as possible. The adjacent bedroom was rather large and had a window already so it was no issue cancelling one window and adding a closet along the back wall.

Dressing up the dining room

As a bonus, the dining room was a little oversized, and since we removed the existing hall closets, we decided to add storage there to fill the space. It’s so important to think of the future buyers and how they will be living in the space, so we felt this was an important addition to make! 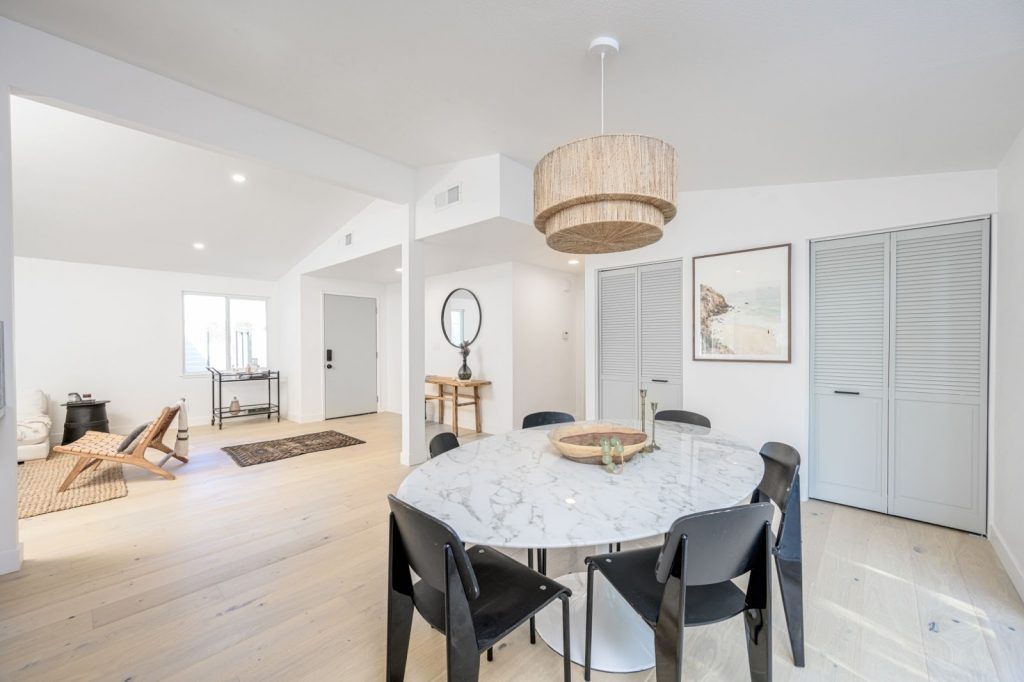 Stylistically, this home didn’t have a very defined architecture to begin with. So after looking at comps and considering the city, we decided to give this home a beachy modern aesthetic! Kept the walls light and bright, finishes neutral to appeal to buyers, and a high contrast exterior paint scheme for added curb appeal!

Dalas Dodd is Sundae's Interior Design Team Lead. In this role Dalas is integrally involved in efforts to redesign and restore dated and damaged houses, with an emphasis on preserving the original character and charm of each home. Prior to Sundae, Dalas was a designer and project manager with Wedgewood Inc., a California-based real estate investment and rehab company.