Investors and consumers alike have abounding questions regarding the state of the economy as uncertainty across the globe mounts. One thing remains certain: the power of the U.S. real estate market.

The war in Ukraine already has an economic impact worldwide. Even the most seasoned political experts can’t predict how long the crisis is going to last. The exacerbating geopolitical risks are leading to greater financial market volatility with oil and other commodity prices soaring. However, U.S. real estate provides a bright spot.

Immediate impact on energy costs and the price of housing

The price of oil has gone up to about $110 per barrel. On average, the price of gas has risen to $4.24 per gallon across the U.S and over $6 in some parts of California. Then, add on top of this the fact that the price of energy is factored into everything: it’s a major cost of doing business.

It’s not just businesses and consumers with higher transportation and manufacturing costs that oil prices are impacting. Petroleum is used in production of 6,000 different products, from plastic containers to panty hose.

Its impact on housing is most evident in the 30-year fixed mortgage rate. This moves in parallel to the 10-year treasury yield. The reason for this relationship, on average, mortgages are paid off within 10 years, either through resale or refinancing of the property. The difference between the two rates, or the spread, is under stable economic conditions oscillating between 1.5 percent and 1.75 percent. The spread has been widening sharply with mortgage rates rising much faster than the 10-year yield.

In light of added geopolitical uncertainty, lenders have begun to price in risk of recession and exercise more caution. If the war in Ukraine escalates further, we may see a greater gap in the spread. Especially if uncertainty starts placing downward pressure on Treasury rates, while mortgage rates continue to rise. 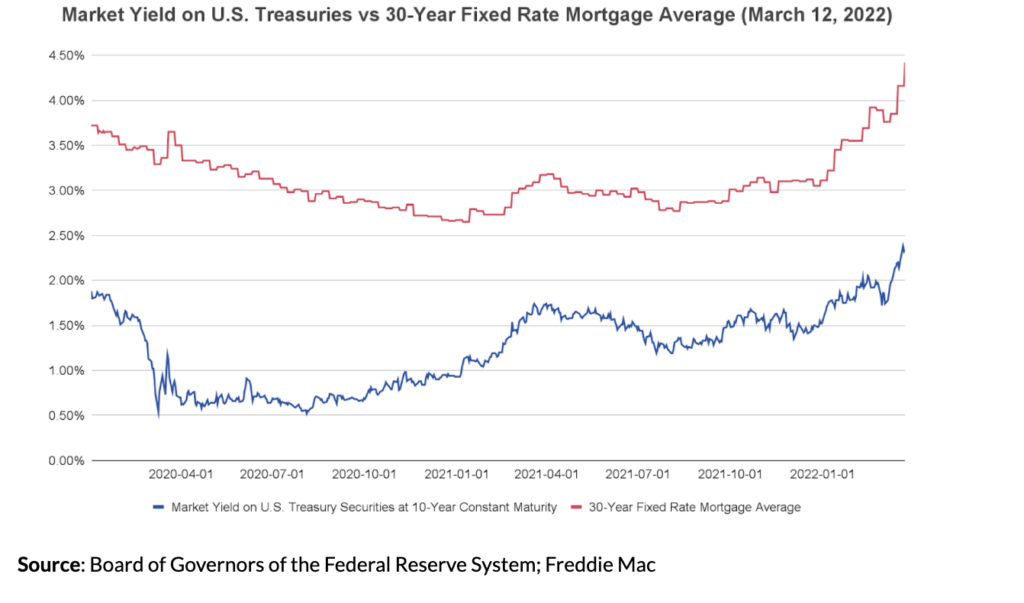 Mortgage rate increases make it harder to qualify for a loan because underwriting requirements become more stringent. Those who are able to qualify to buy a home and simultaneously absorb higher prices, will become lucky homeowners. Those who missed their window of opportunity, will have to wait for the next one.

This is primarily due to the lack of homes available for purchase or rent. The total supply/demand gap is estimated to be around 6.8 million homes, with only 2.6 million vacant rentals and 726,000 vacant homes for sale. Existing housing stock is off limits because following two years of historically low interest rates, homeowners will be locked in place since the opportunity cost of moving became too high.

There is an old Wall Street saying referring to commodities, “the cure for high prices is high prices.” This means that demand will wane as prices rise because consumers will find substitutes. Supply will also increase as companies that extract or grow commodities see enough profit in opening new mines, or growing more crops or drilling new wells. The combination of the two forces will help bring prices down.

Inflation had already been rising before the war started. COVID put our economy in a precarious position and caused a global supply shock. It closed factories and crippled international supply chains, raising prices of everything from cars to fast food. Homebuilders have a backlog of homes they haven’t completed or brought to market due to these supply-chain disruptions. Projects were delayed: door hinges took forever to arrive, windows’ lead time rose to 12 months, and workers became harder to find. 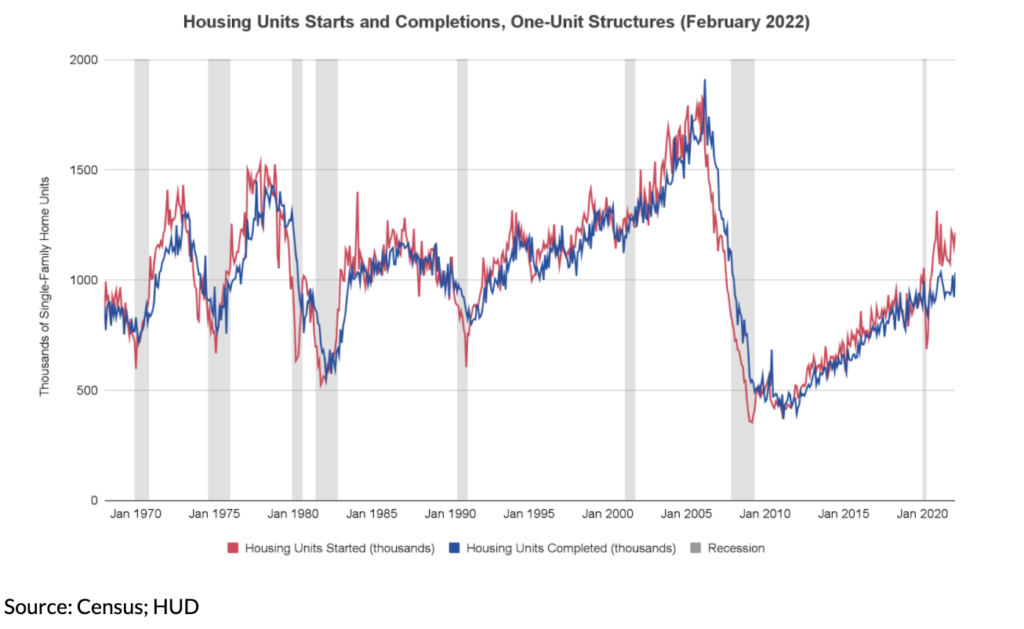 The conflict between Russia and Ukraine is likely to further drive up costs of commodities and delay project timelines. Russia is among world’s leading producers of nickel, steel and aluminum. All of these are used in construction materials. Nickel reached an all-time high of over $100,000 per ton halting trading on the material for the first time in three decades. This comes following two decades of lagging construction, when 5.5 million fewer units were built on average from 2001-2020 versus prior decades. 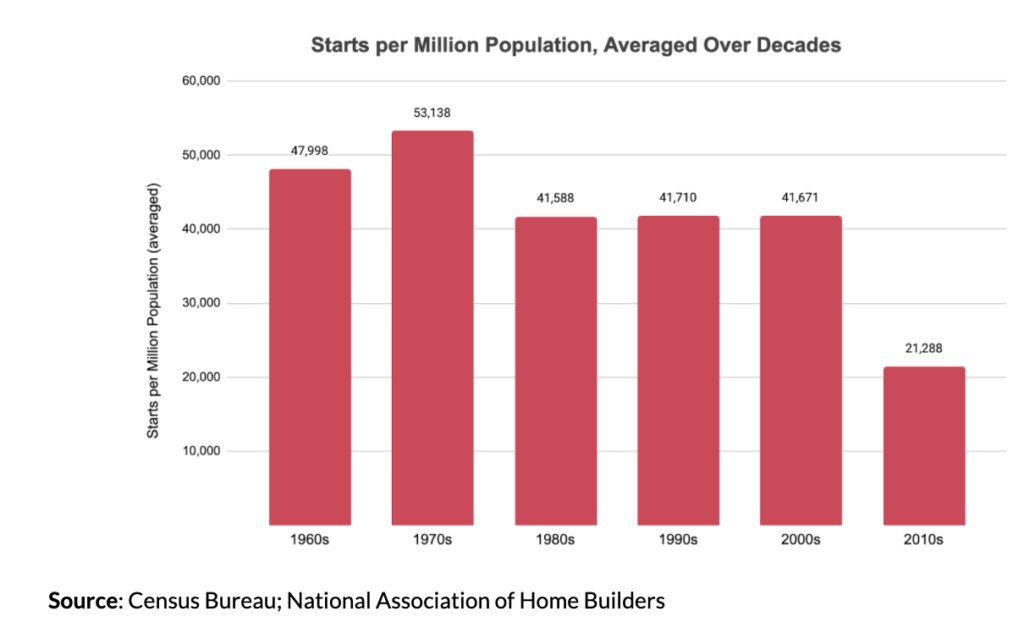 The Fed’s decision-making is harder than ever

The ongoing labor shortages and supply chain problems have a big probability of slowing economic growth. Last week, Goldman Sachs downgraded its growth outlook to 1.75 percent. The GDP will largely depend on consumer behavior since consumption makes up nearly 70 percent of GDP. Consumer confidence has been falling under the pressure of the last two COVID-19 waves, inflation concerns, and geopolitical news.

When the federal funds rate rises, interest rates on home mortgages, auto loans, credit cards, home equity lines and small business loans increase as well. The rise in borrowing costs is intended to gradually restrain the level of spending in the economy and lower the inflation. Unfortunately, this comes with a recession risk, or even worse, a stagnation risk, especially when real wages (inflation minus wage increases) have declined.

In four out of the five recessions, the oil prices doubled right before the economic slowdown. As a result, the Fed will have to weigh inflation risks against recession risks.

U.S. real estate has an advantage

The war in Ukraine represents a “global stagflationary shock.” While the United States is not immune to it, Europe is the region most exposed to risks and currency fluctuations caused by the crisis in the region. In times of instability, investors look for a flight to safety. One of the most secure instruments appears to be U.S. real estate. Historically, the United States Dollar appeared to be a more stable currency and U.S. housing prices held its own against inflation (see graph). 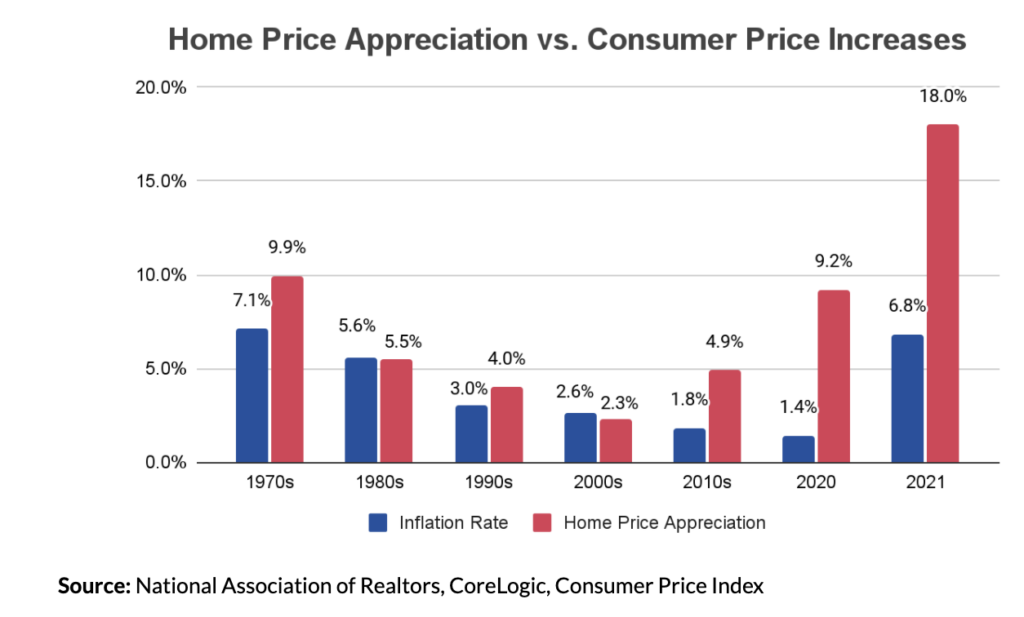 For example, real estate price growth in South Florida was fueled by South American investors looking to hedge against currency fluctuations for almost a decade. Investors across the globe recognize this. Until Beijing placed tight limits on how much capital can leave the country in the wake of a devaluation of Yuan, Chinese investors were spending many billions on U.S. real estate.

U.S. real estate is a hedge against inflation

Foreign and domestic investors alike see the value of real estate, especially during times of economic uncertainty. Real estate is a hedge against inflation for a variety of reasons:

For decades, U.S. real estate has consistently performed. In the past few years, extraordinary appreciation across the country has put real estate at the forefront of all conversations. As an inflation hedge and real asset, real estate remains a powerful investment option during this time of uncertainty.