To combat this unhealthy level of inflation, the Fed began to raise interest rates.

Inflation is at a 40 year high of 8.5 percent. Recently, the average 30-year fixed mortgage rate also spiked to 5.35 percent, the highest it’s been since 2009. To put this in historical context, mortgage rates briefly reached 5 percent in November of 2018. At that time, inflation measured barely above the Fed’s target of 2 percent. When interest rates rose, the markets rapidly declined and caused the Fed to pull back on the planned rate hikes.

Now the Fed is being asked to walk a tightrope of trying not to send the economy into a recession while hiking interest rates. The Fed promised a series of seven rate increases this year, but the question remains: just how high can mortgage rates go?

Assuming the yield curve remains flat, we can anticipate that mortgage rates should peak somewhere between 5.7 percent and 5.9 percent. However, as circumstances change, the Fed may adopt a different policy. 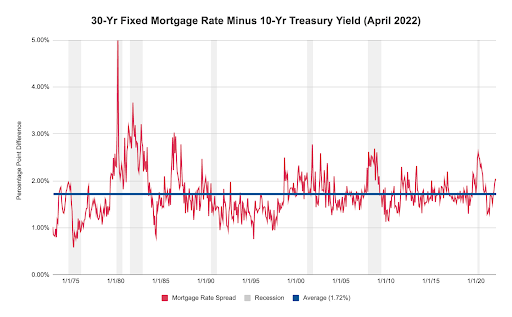 Finding a sense of equilibrium

At present, the relationship between mortgage rates and treasury yields is out of balance. Historically the average mortgage spread, or difference between a 10-year treasury yield and a 30-year fixed mortgage rate, has been about 180 Basis Points.

With the 10-year Treasury at 2.9 percent, the 30-year conventional mortgage should have a rate of 4.7 percent, however, it’s well over 5 percent. This might be because investors have already priced in additional rate hikes.

Another important thing to remember, currently, the Fed owns nearly $3 Trillion in Mortgage Backed Securities (MBS). The interest rates on these mortgages are very low. To illustrate this, pretend that someone bought a house 20 years ago. It went up in price from $400,000 to $800,000. They could easily refinance given the amount of equity they have. The Fed buys the loan and releases the funds to the homeowner, who takes their $500K and spends it on whatever they want. The Fed doesn’t actually need to print that money, it is electronic. Similarly, once it decides to stop, it has a choice, either to sell MBS or to wait until someone refinances or sells their home. It gets repaid and simply doesn’t release the money back into the economy. So, the amount of money available for consumers to spend has gone up so much that too much money is chasing too few goods.

The Fed toolkit appears to be pretty limited. As rates get higher, there are fewer options they have to get rid of their MBS portfolio. It’s also worth noting that as 10-year treasury rates become higher, Mortgage Backed Securities become less attractive.

Between supply chain disruptions and inflation, the Fed is constantly trying to adapt based on the latest changes. Even as the Fed tries to sort out inflation, real estate is built to withstand market fluctuations. We’ll be watching closely to see how the Fed chooses to approach interest rates moving forward, as they will impact housing and other areas of the economy.